As a mid-size specialty converter of paperboard packaging and paper, being versatile is a prized commodity for Appleton, Wisconsin based Norka, Inc. When management began searching for a new sheeting machine to handle greater workloads as a result of increased business, they narrowed the field down to two contenders. After testing, they chose and installed a new CHM 1700 precision sheeter from Colter & Peterson last July. 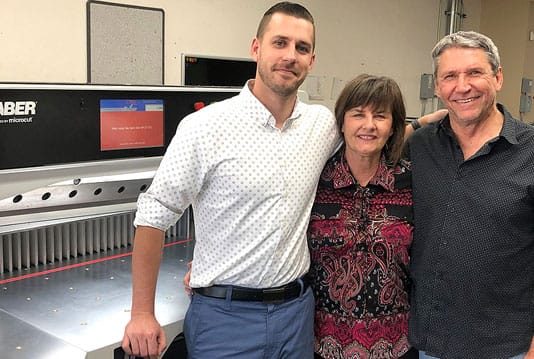 When you’ve been in the printing business for 30 years, you learn a few things. Mark Olsiewski certainly has. When the numbers at Impressions in Ink started to slide a bit in 2017, he proactively made some changes like investing in new equipment, something he had done previously to grow the business. Six months after installing a new 37-inch SABER® X-15 paper cutter from Colter & Peterson, he’s looking forward to more success in 2019. 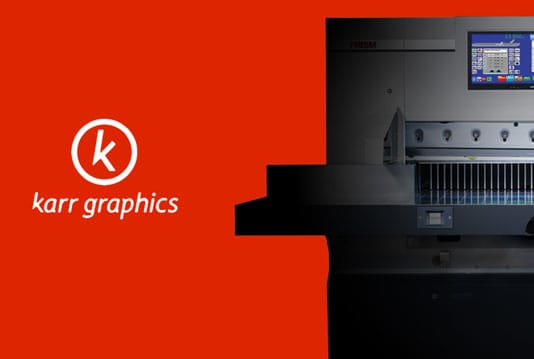 The fourth quarter in any football game is the most critical period, the one where decision making can win or lose the game. It’s the same for many printers such as Karr Graphics in New York City. Faced with a tough decision heading into their busiest time of the year, Larry Karr made a great call. He bought a new 36-inch PRISM® paper cutter with Microcut® from Colter & Peterson that has produced winning results since October. 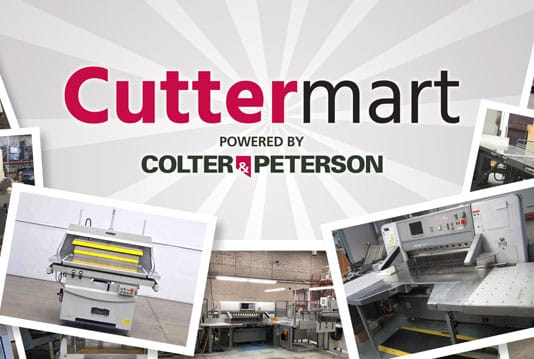 While eBay is a popular site to buy clothing or power tools, Colter & Peterson’s President and CEO reminds shoppers that an auction website is no place to buy a paper cutting system. That’s why Bruce Peterson created Cuttermart, a safe online resource with a wide selection of machines that protects customer investments. 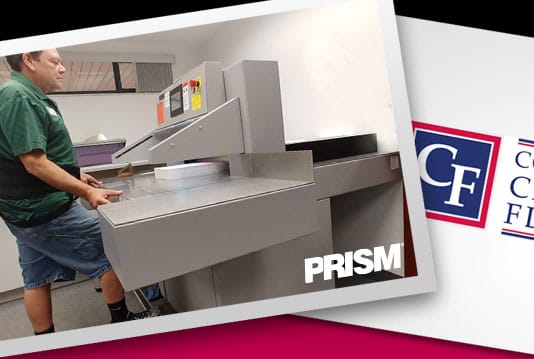 Higher education is all about learning and preparing for a better future. Operating them can be challenging, especially smaller public institutions since fiscal responsibility is almost always paramount. That was a major factor when the digital print shop at the College of Central Florida struck gold by installing a new PRISM® 73H paper cutter with Microcut® from Colter & Peterson six months ago. 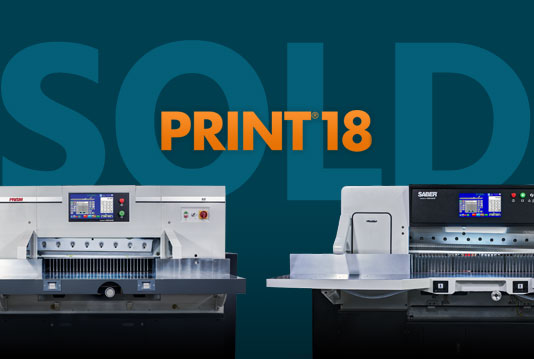 For Colter & Peterson, PRINT 18 ran true to form. In recent years, the Chicago trade show has attracted less attendance than a decade ago but the percentage of buyers has improved. C&P found new homes for the two paper cutters that were demonstrated in the booth, and discussions continue with a multitude of leads that were generated at the September 30-October 2 event. 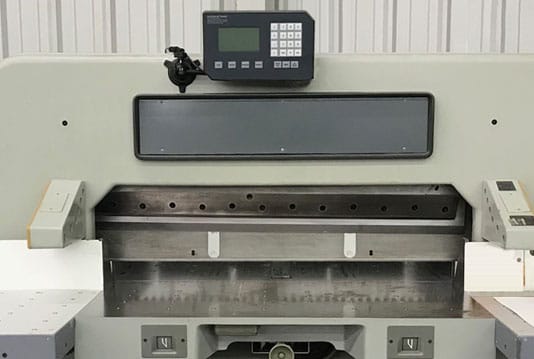 When a small graphic finishing shop challenges themselves to deliver big things to its customers, it requires a concentrated effort on everyone’s part. At The Fontana Groupin Southlake, Texas, three key components for owner Jim Bugg are productivity, flexibility and reliability. 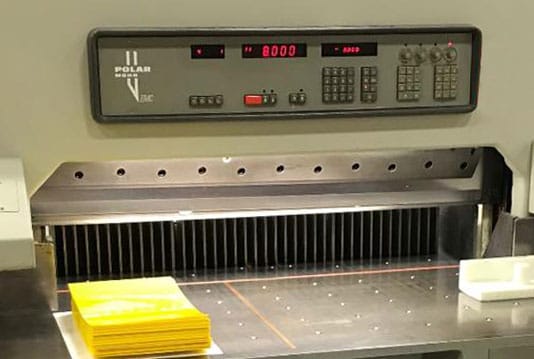 When you provide hazard alerting and utility graphics products and services to energy, fleet and other top security facilities in the U.S. where safety is a top priority, it’s wise not to take any chances. 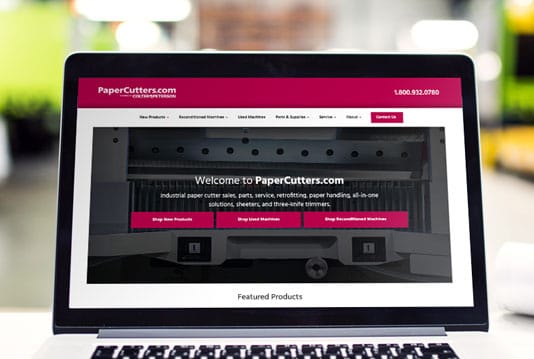 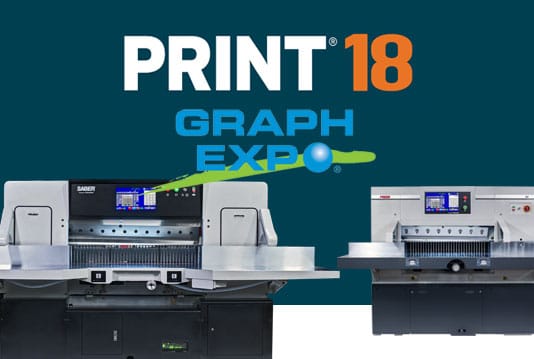 Colter & Peterson’s two most popular paper cutting brand lines are about to attract even more attention. The new SABER® and PRISM® machines will be prominently featured in the C&P booth (1607) at PRINT 18, to be held September 30-October 2 at McCormick Place in Chicago. 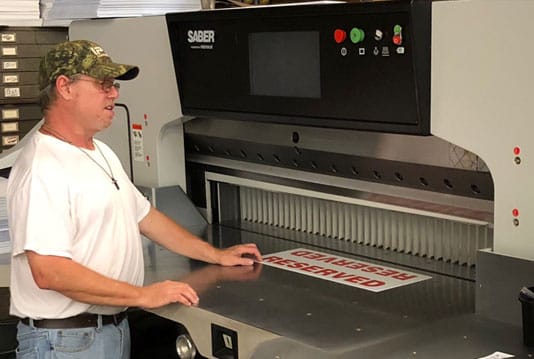 Farmer Signs understands the importance of finding a good thing and running with it. Once a small design and production firm of signage and POP materials for major oil companies, the Atlanta company was asked by an advertising agency in 1985 to develop a real estate sign for a local client. 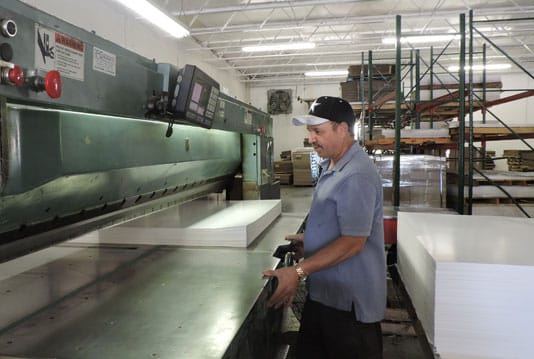 Dallas Paper Company may be small in size but they are big on opportunity. When owner John Merigold decided the time was right to expand large and wide format sales, he turned to a trusted partner for a solution. 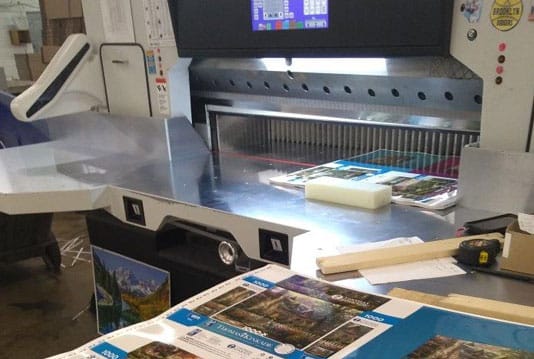 The holiday season has just begun for Bob Shevlin and the employees at Edaron, Inc. The addition of a new press is making the 2017 installation of a Colter & Peterson 54-inch SABER® paper cutter with a Microcut® electronics package even more effective in getting product out the door faster. 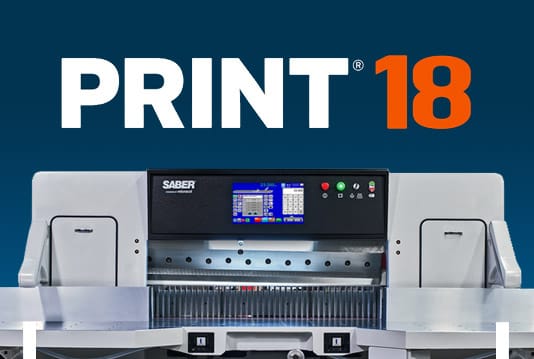 Printers attending PRINT 18 looking for highly productive and cost efficient finishing equipment need to look no further than the Colter & Peterson booth (1607). A pair of new and dynamic paper cutters and a new PRISM jogging unit to help improve the flow of finished work will be demonstrated during the September 30-October 2 show at McCormick Place in Chicago. 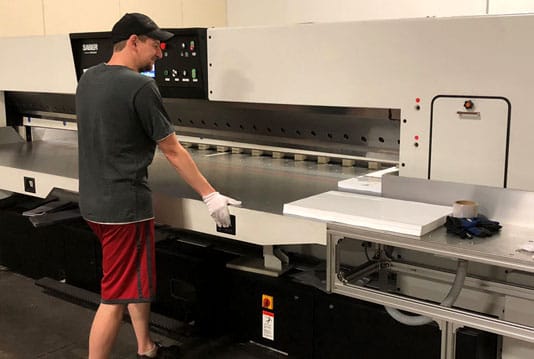 There are many reasons why E & T Plastics is one of top plastics distributors and components manufacturers in North America. Making the right call on equipment decisions to keep themselves unique to the industry and their customers is one of them. 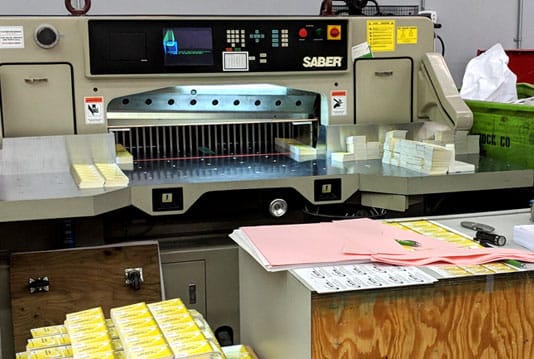 Two and a half years ago, Tim Goff had bigger things planned for his small commercial print shop, Lake Printing & Design, just outside of Charlotte, North Carolina. 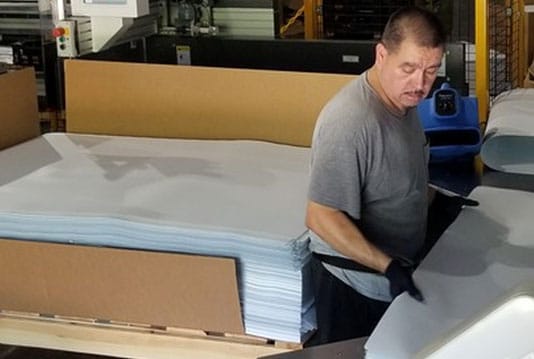 The crew at K&R Plastics (www.krplastic.com) know first-hand the difference a year makes. The plastics industry remains red-hot in terms of production and job creation, and the Austin, Texas company is right in the thick of it. 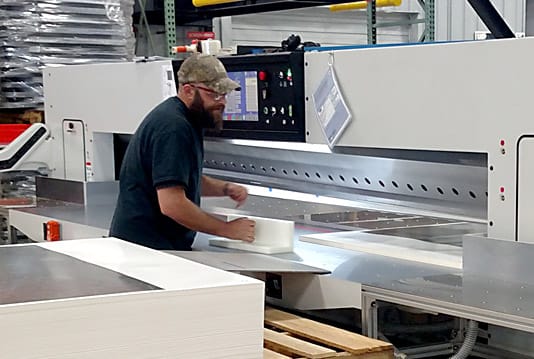 With a population of about 15,000 people, Traverse City, Michigan may not be very large but one of its companies has a big reputation that’s getting wider. 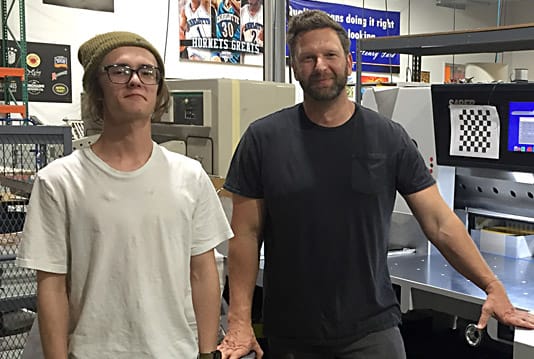 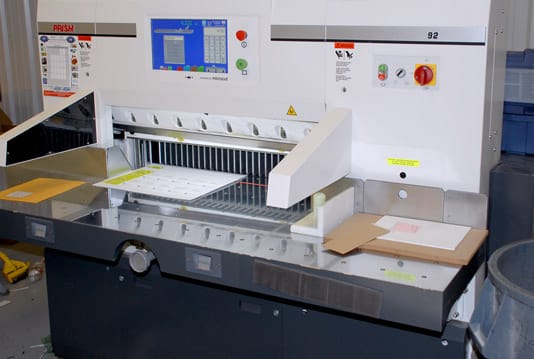 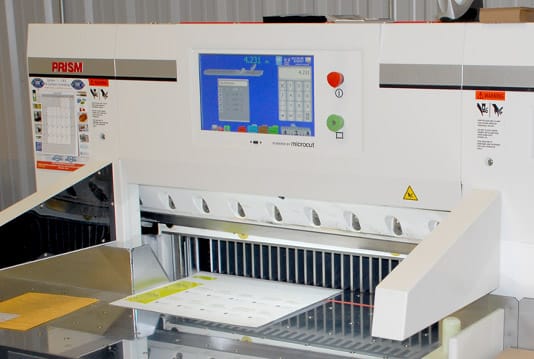 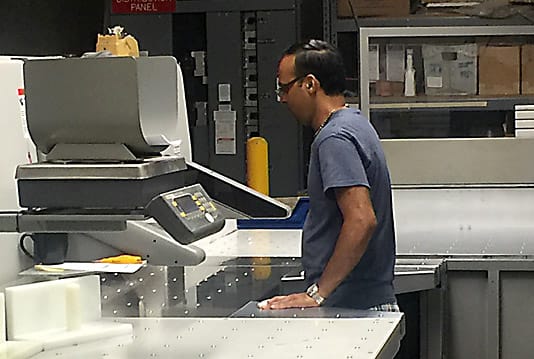 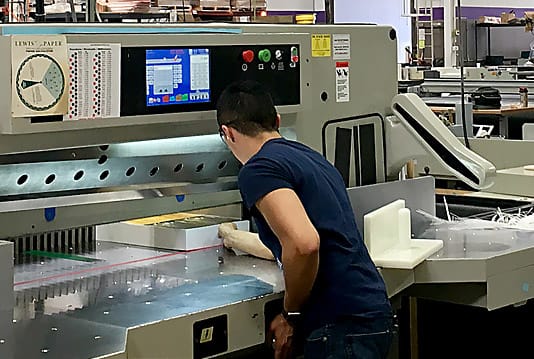 Earlier this month, the employees of Team Concept Printing in Carol Stream, IL had good reason to celebrate. Located 30 miles west of Chicago, the shop’s owners marked its 20th anniversary by hosting a company party at the nearby Arcada Theater’s speakeasy. The last year has been particularly rewarding for TCP, hiring more employees and adding equipment to keep up with an increase in business. 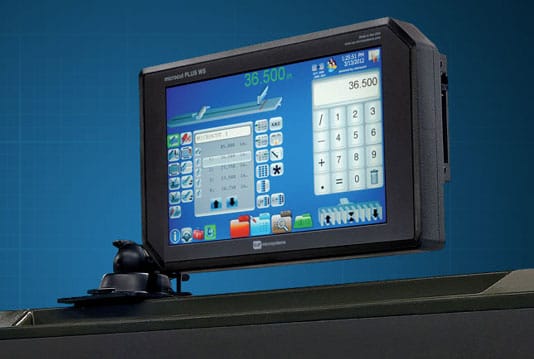 Microcut/Colter & Peterson expands market reach at Graphics of the Americas

Fishing in Florida at this time of year is usually very good, and it’s not always limited to the sea. At Graphics of the Americas, held Feb. 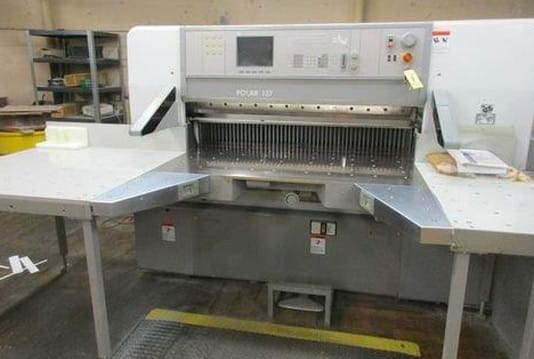 Growing up in his grandfather’s letterpress shop, Brian Solov has learned a few things during his 30-plus years in the business. Now President of Boston area MicroPrint, he’s still learning. Since having a reconditioned Colter & Peterson 30-inch Polar paper cutter installed the first week of February, Solov’s purchase is producing better than expected productivity gains and other pleasant surprises. 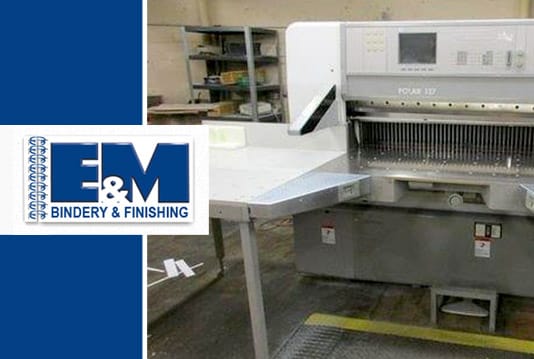 For 56 years, E&M Bindery and Finishing in Clifton, NJ has remained on top as one of the largest and most technically advanced binderies on the East coast. 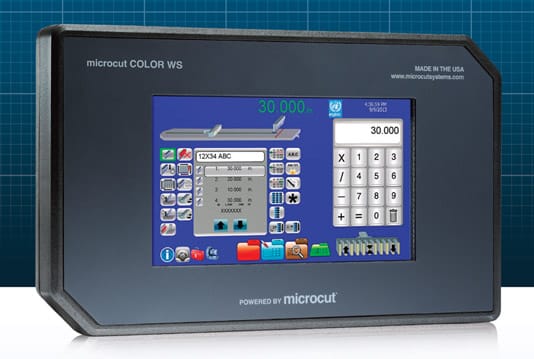 Knowing your customers and having equipment that meets or exceeds their expectations is often a recipe for success. As Microcut/Colter & Peterson has found common ground recently with visitors who have traveled from Mexico, Central and South America, the feeling is this year’s Graphics of the Americas show will result in giving the customer more of what they need. 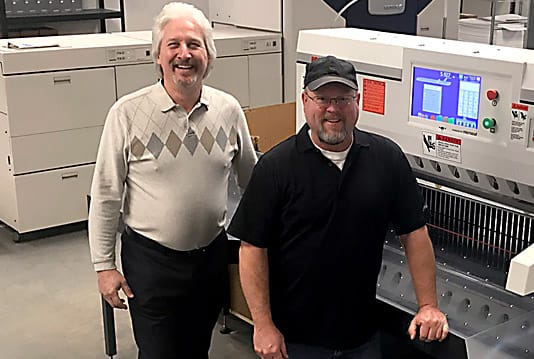 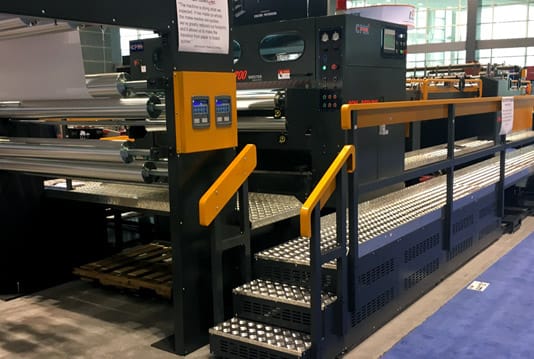 Colter & Peterson enjoyed tremendous success demonstrating the incredibly efficient CHM 1700 precision sheeter for prospective customers at PRINT 17 last September. The management team at Orora Visual in Clifton, New Jersey are already well aware of its benefits, having the foresight to become the first U.S. company to install the machine over two years ago. 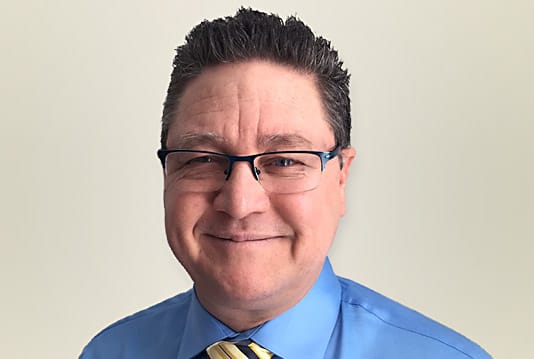 Richard Peereboom has been promoted to President of C&P Microsystems, a division of Colter & Peterson and North America’s largest independent distributor of paper cutters and paper handling equipment.