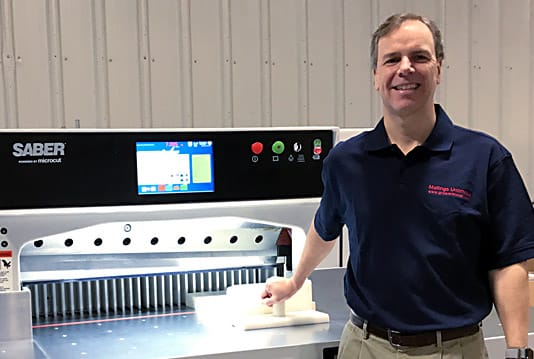 Mailings Unlimited installed a new top-of-the-line 37-inch SABER® paper cutter with Microcut® PLUS electronics from Colter & Peterson two months ago. Co-owner Jon Webel says it played an instrumental role during one of Portland, ME digital shop’s busiest periods of the year, and he expects the automation capabilities of the cutter will boost productivity to greater heights in 2018. 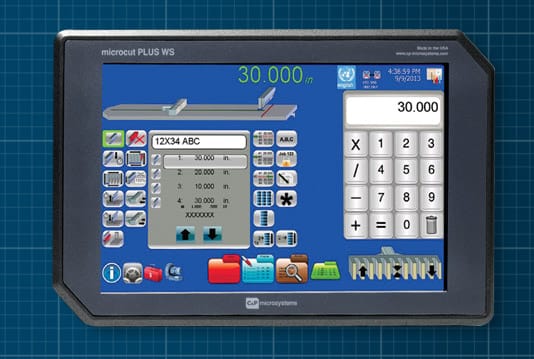 Microcut/Colter & Peterson announces plans for 2018 Graphics of the Americas

There is truth to the saying, “Good Things Come in Threes”, especially when it involves the Graphics of the Americas Show. Besides the sand, surf and sun of Florida, Microcut/Colter & Peterson (booth 609) will feature a trio of powerful Microcut® retrofit systems – PLUS XL, COLOR and JR – at the Broward Convention Center in Fort Lauderdale. The show is scheduled for February 22-24. 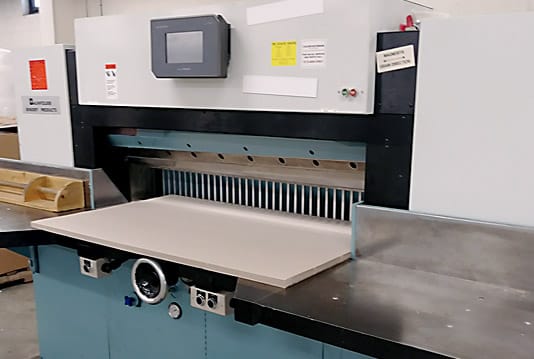 Eight months ago, Colony Packaging & Machine made the biggest decision in its 53-year history by changing its name. Formerly known as Colony Paper, the new name better reflects how the family owned, third generation-run business has evolved since three war veterans opened the shop in 1964. 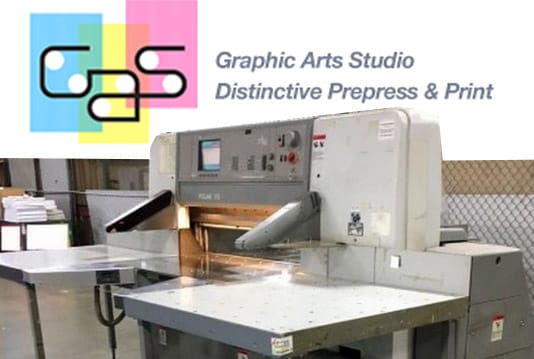 When a majority of the work you do is for retail customers with products that are sold at department and big box stores, ‘tis the season to be busy. Graphic Arts Studio (www.gasink.net) in northwest suburban Chicago realized they needed to upgrade their finishing department in advance of this year’s holiday season. 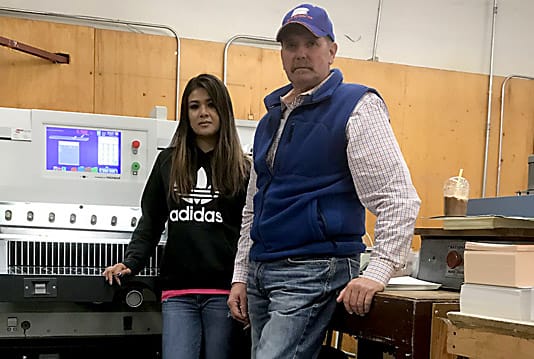 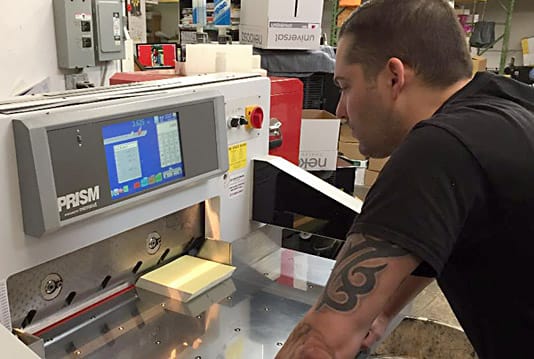 Visiting an automobile dealer after Labor Day is usually a good time to trade for a newer vehicle, what with next year’s models arriving and taking up space. Ridgewood Press owner Bob Modelski used the same philosophy to swap paper cutters. 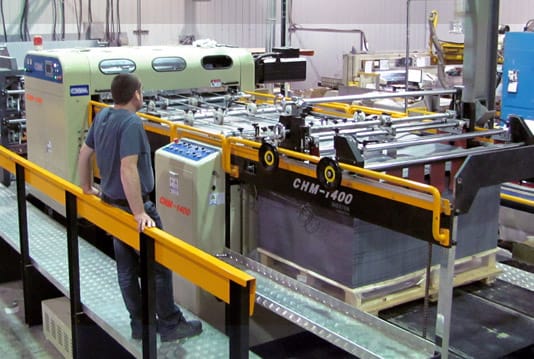 Pro Conversion has come a long way since Alain Provencal opened the Quebec business in 1995. The converting operation started with only one winder but now has three. In addition to a packaging line, they expanded in 2014 by selling thermal paper rolls and have since added bond paper rolls and paper rolls for large format printing. 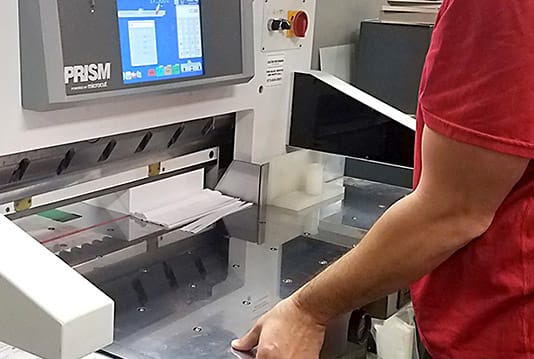 As much as the St. Louis Arch was recognized as the “Gateway to the West” when it opened in October 1965, the digital frontier figures to be prominent in the future success of Gateway Digital Press. The St. Louis printer’s business is skewing more digital these days, requiring management to find the right equipment to handle greater demands. 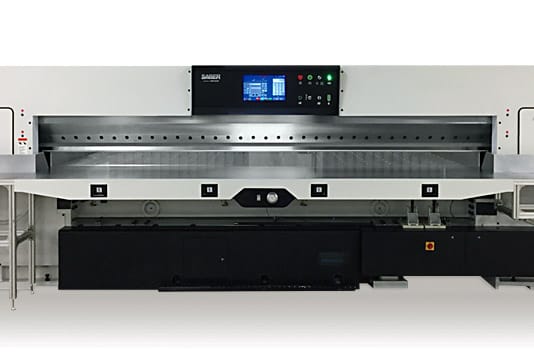 Wide format providers have discovered the versatile options Colter & Peterson offers, with paper cutters extending to the 141-inch range and having the ability to cut many different and difficult substrates. 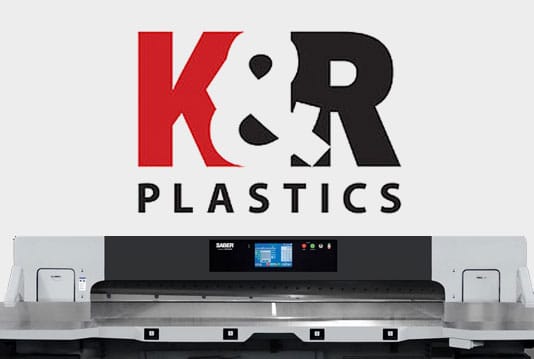 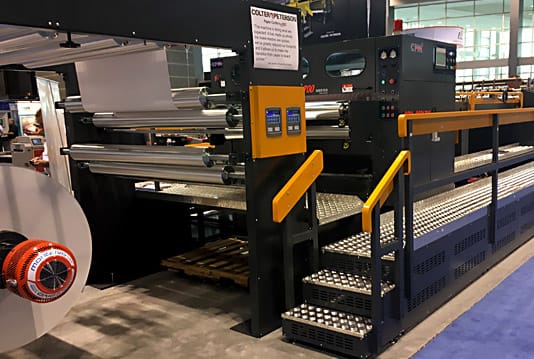 PRINT 17 was a lucrative event for Colter & Peterson. The two new paper cutters and new CHM 1700 precision sheeter that were demonstrated last week at McCormick Place were sold at the show, and are either in route or being installed at their new homes. 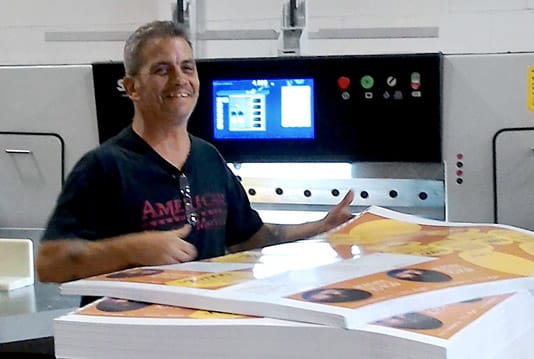 BC&B Graphics does a sizeable amount of high visibility work for Philadelphia market and southern New Jersey clients. The action doesn’t get any faster than fulfilling high demand print requests for a prominent casino customer, where job creation and turnaround is often measured in hours. 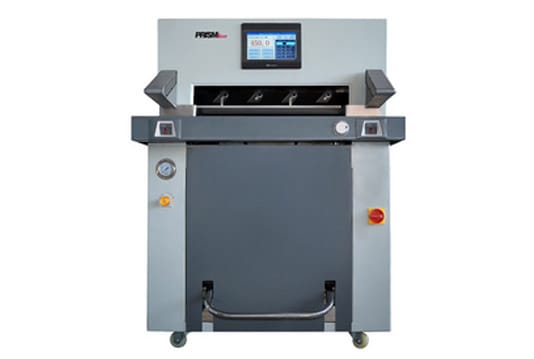 The Colter & Peterson team expects to get a five-day workout manning two booths at PRINT 17, being held September 10-14 at McCormick Place in Chicago. C&P will exhibit three new paper cutters in booth 4013. A few rows over, a new CHM 1700 precision sheeter will be demonstrated in Shanghai Eureka Machinery’s booth 4413. 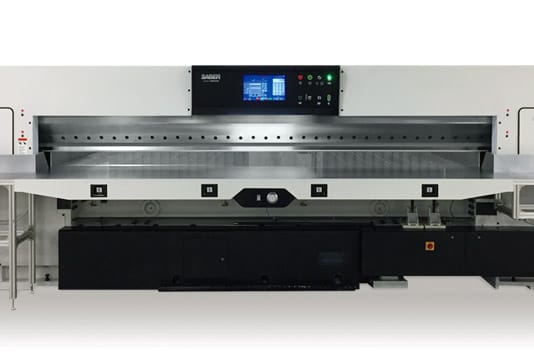 Following a trend that took root at last year’s show in Las Vegas, Colter & Peterson (booth 3150) will be giving printers and converters more of what they want at the SGIA Expo in New Orleans. From October 10-12, show visitors can learn how the 141-inch SABER® X-15 PLUS paper cutter with Microcut® can improve productivity 50% or more in most shops, while providing a unique edge in the large and wide format arenas. 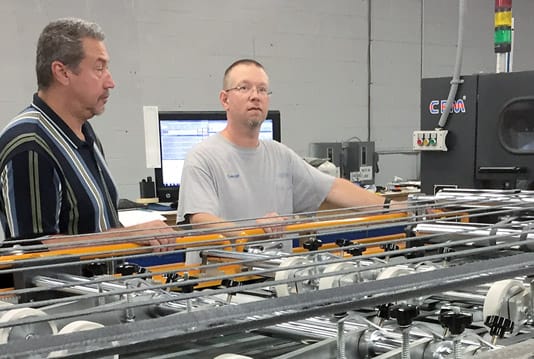 In the sports world, the team that makes the better adjustments usually wins the game. It works in the business world as well. When majority owner George Scharr’s Flower City Group decided to make some internal adjustments regarding its paper resources, they turned to North America’s largest distributor of paper handling equipment. 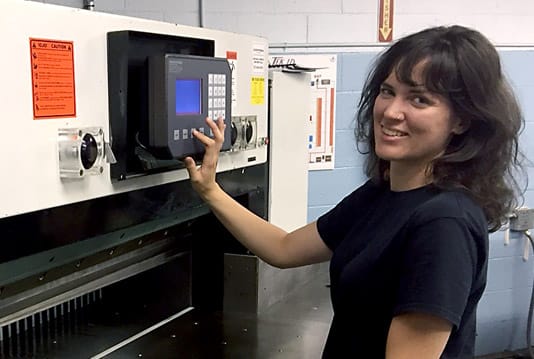 A leading manufacturer of signs, tags and labels for industrial safety identification, TEK I.D. has earned the safety industry’s trust for producing reliable and long lasting products. Printed on multiple material layers – but not paper – company leaders recently turned to a trusted source to rectify a situation in their finishing area. 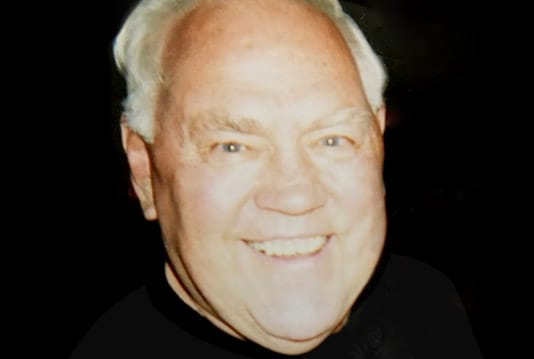 Nearly 100 people attended graveside services for industry stalwart Eric Ronald “Ronnie” Peterson on July 16 in Mahopac, NY. The founder and operator of Peterson and Sons, Inc. for 40 years, he was 84 when he died on June 7 following a lengthy illness. 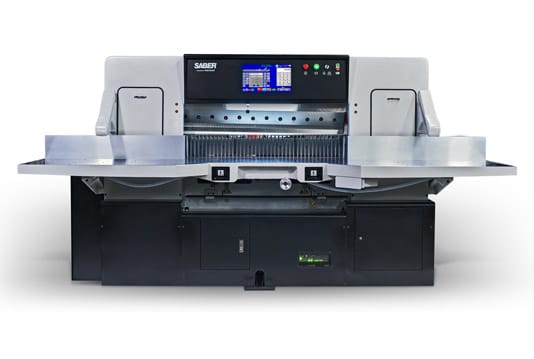 Colter & Peterson to showcase trio of new products at PRINT 17

Playing off the strengths that have made it North America’s preferred choice and the largest independent distributor of paper cutting and paper handling equipment, Colter & Peterson (booth 4013) will feature three new products at PRINT 17. The five-day show will be held September 10-14 at McCormick Place in Chicago. 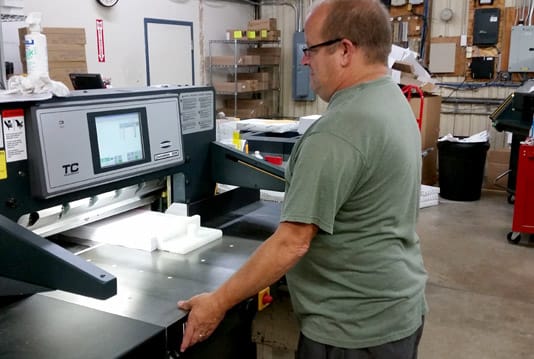 With 15 employees, Handy Mailing Service in Wichita, KS qualifies as a small shop but takes pride in doing things like a big operation, and they do it well. A full service digital and offset print shop, mail house and fulfillment center for business owners who use direct mail, they know what it takes to handle any size project. It starts with a highly talented workforce and includes the right mix of equipment. 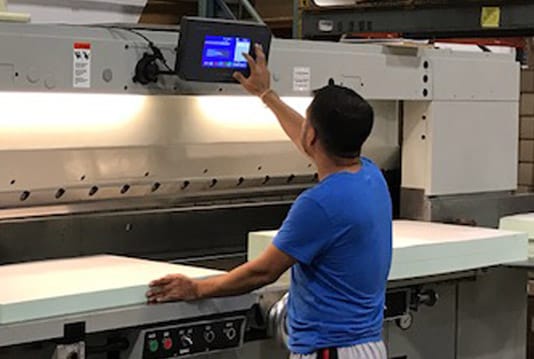 One up and one to go. That’s how things stand after Mid-States Graphics in Hanover Park, IL installed a reconditioned 112” Seybold paper cutter from Colter & Peterson in mid-June. Owner John Miller has high hopes when C&P is expected to deliver his new 65” SABER® paper cutter in September. 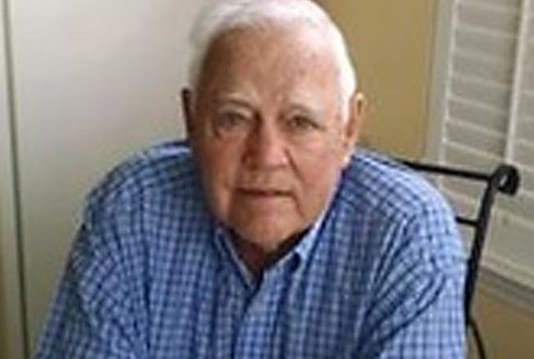 Eric Ronald “Ronnie” Peterson, 84, of Allentown, NJ passed away Wednesday, June 7, 2017 at his home. Born in Brooklyn, he grew up in Mahopac, NY on a family farm. After he married, Ron raised his family in Staten Island and later River Vale, NJ. His retired years were spent in Old Tappan and Allentown, NJ. After serving our country as a veteran of the Korean War, he tirelessly ran his family business, Peterson and Sons, Inc. for forty years. 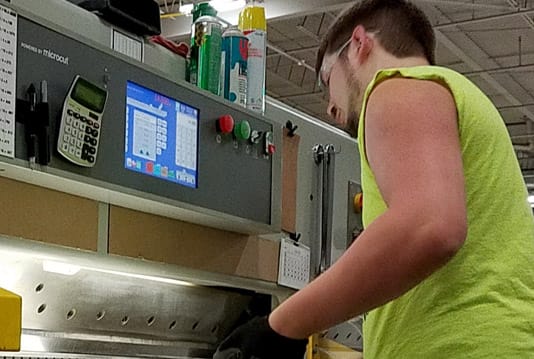 The new school year for many students won’t begin until mid to late August, but for ACCO Brands Corp. the back-to-school season is nearing the finish line. The Alexandria, PA operation manufactures and distributes over 100 million academic and office products annually, including different size covers for FIVE STAR® notebooks. 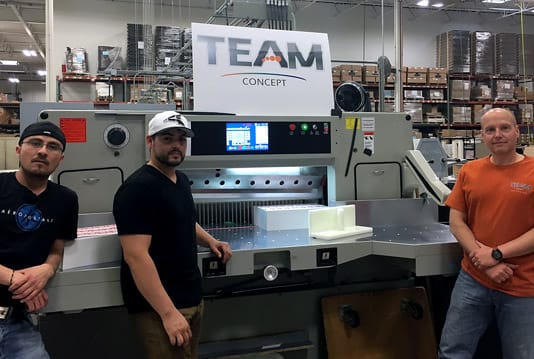 Two years ago, Team Concept Printing in Carol Stream, IL purchased a new 45” SABER® paper cutter from Colter & Peterson to handle an influx of work. Experiencing more growth and needing another machine, management didn’t hesitate returning to its source. Three months ago they installed another 45” SABER, a reconditioned unit complete with an automated Microcut® Plus electronics system. And their productivity continues to flourish. 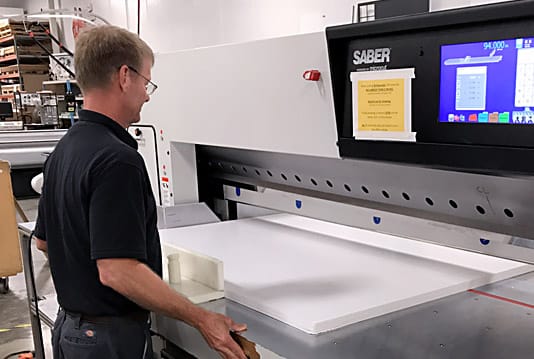 One of the tags lines SGS in Cincinnati uses to promote its capabilities is “We are Better. Faster. Leaner.” Talk about truth in advertising. Since adding a mammoth new 141” SABER® X-15 paper cutter with Microcut® from longtime service vendor Colter & Peterson in early January, its productivity numbers are literally through the roof. 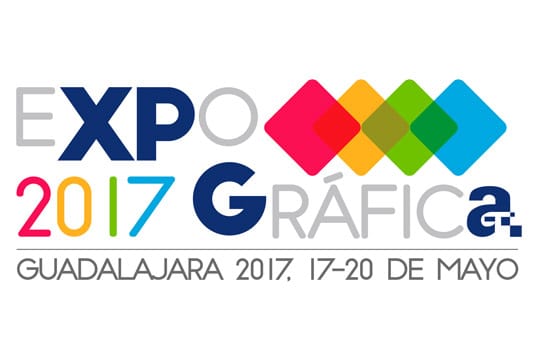 Automation continues to spark exciting new developments in the printing industry, and two leading companies are teaming up side-by-side to showcase a unique system featuring the newest automation at Expografica. Set for May 17-20 in Guadalajara, Mexico, Microcut (booth 805) will demonstrate how job files that contain cut block information created by Ultimate TechnoGraphics Inc’s (booth 803) imposition software can be converted by a Microcut® PLUS retrofit or Cutter Control System. 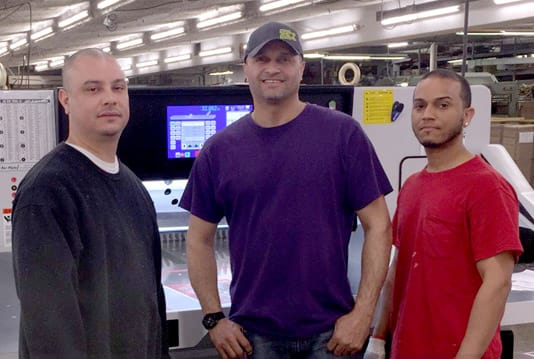 As recently as 2013, sales of board games and jigsaw puzzles were heading in the wrong direction. The reason? The rise of mainstream smartphone and tablet use encroaching on family time. But an influx of new games and interest generated by millennial consumers has revived the time honored tradition. That good news benefits Holyoke, Mass. manufacturer Edaron Inc., which installed its first-ever new paper cutter earlier this month when Colter & Peterson delivered a 54” SABER® machine with Microcut®. 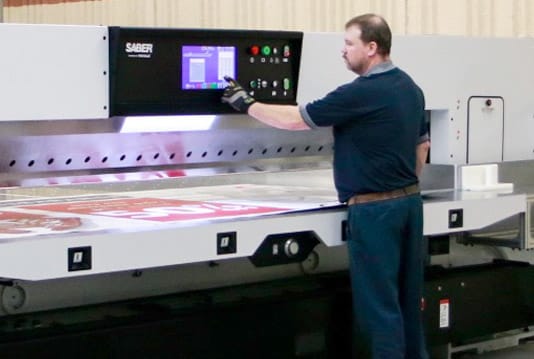 Consumers today are driving the marketplace in more ways than one. They latch onto and drive sales for a product that is marketed and promoted a specific way, such as an interesting or unique P-O-P display. Others take notice and it becomes a trend, which then kicks in the vicious cycle of trying to continuously one-up the competition. 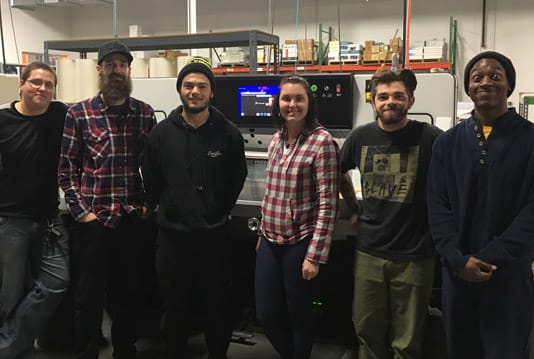 Many people in North Carolina are excited with the University of North Carolina being a #1 seed in the NCAA basketball tournament and this week’s Sweet 16 round, but the real triple threat is Piedmont Graphics in Greensboro. 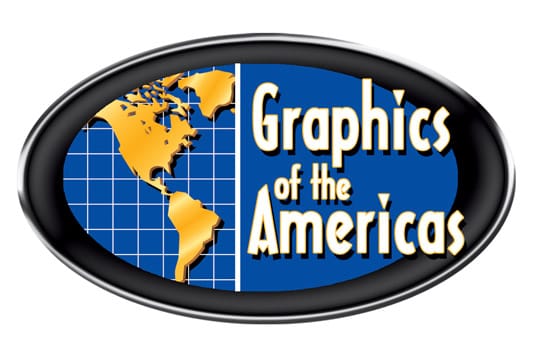 There was some concern over a new venue for last month’s Graphics of the Americas, but for Microcut/Colter & Peterson that was put to rest on the first day of the show. Moving up the coast from Miami to Ft. Lauderdale did not put a damper on booth traffic or sales for the three day event, which was held February 16-18 at the Broward Convention Center.